The soldier cottages often consisted of one lager kitchen also serving as living room and bedroom, one smaller chamber and a built in vestibule. The walls consisted of logs out of timber and the roof was covered with birch-bark and turf. Usual dimensions were 24 feet long, 14 feet wide and 9 feet high. In addition there were a cow house, a barn, a storage house and an outhouse. Close to the cottage there were a small arable and pasture land providing the soldier with food for the family and hay for the animals. From the farmer community, the soldier received a cow, some sheep or a pig, some chickens and sowing seeds. 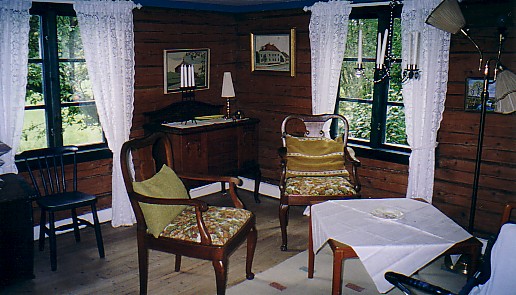 Photo of the second living room in the historical part of the cottage.

In the 1680´s, King Karl XI reorganized the Swedish armed forces to a uniform and permanent soldier system across the whole country. The purpose was to always have a certain number of well-trained soldiers to be easily mobilized in case of war. King Karl XI also wanted to strengthen the armed forces after the Danish-Swedish war 1675 - 1979. This was impossible with the current system where in state of war each farm to the best of their ability temporarily had to supply with men to be soldiers.

With the new system, farms were grouped in communities that permanently had to keep one soldier with equipment, a small salary, a piece of land and a cottage, the so called "Soldattorp". In return the farmers were freed from military service.
It was the farmers´ responsibility to recruit soldiers. Most soldiers were recruited among poor people or henchmen that viewed this as a way up in the society by becoming an own cottage and piece of land. All new soldiers had to be presented and approved of by the company commander. If a farmer community did not succeed in recruiting a suitable soldier, it could very well happen that one of the farmers had to war.

Soldiers could only be discharged from military duty on request with a guilty cause such as high age, war injury or sickness. But if the soldier was believed to be able to serve, the request was denied. On discharge the soldier was allowed to stay in the cottage for some additional time before leaving the place that had been his home for a long time. If he was healthy and strong he could serve as a henchman to one of the farmers or help out with some simpler chores in the community. But the soldier pension was very low, so he and his wife often ended up in the poorhouse.

In 1901, the permanent soldier system was replaced by a compulsory military service for all capable Swedish men. This meant one longer and continuous training period and some shorter refresher courses later on, much alike the now present system.

(back to cottage presentation)